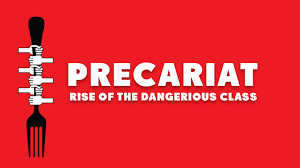 Guy Standing developed his ideas about The Precariat in his earlier work, and the following notes are taking from his account of a new class structure in his 2011 bok “The Precariat: the new dangerous class”

Plutocrats: a few super-citizens with vast wealth, mostly ill-gotten, detached from the nation state, with passports of convenience from several countries. Much of their power is manipulative, through agents, through the funding of politicians and political parties and threats to move their money unless governments comply with their wishes.

Elites: are national citizens somewhere. Elites and plutocrats act as the effective ruling class, almost hegemonic in their current status. They embody the neo-liberal state, and manipulate politicians and the media while relying on financial agencies to maintain the rules in their favour.

Salariat:  those with long-term employment security, high salaries and extensive enterprise or corporate benefits. They serve in state bureaucracies and in the core echelons of corporations.  Since they receive a growing proportion of their income and security from capital, in the form of shares. their own incomes could increase if wages are pushed down. This is one reason for not including the salariat with others below them in one class

Proficians:  a growing group of contractors, consultants, self-employed “businesses” and the like. They earn high incomes, but live on the edge of burn-out and constant exposure to immoral hazards, often breaking laws with abandon. Their numbers are growing, as is their influence on political discourse and popular imagery. Not part of a single working class, as they are essentially entrepreneurs selling themselves, truly commodified labour power.

the old proletariat: the core, shrinking fast all over the world. Its remnants will continue, but they no longer have the strength to develop or impose their agenda in the political domain, or even frighten capital in demanding concessions. Welfare states, and regimes of so-called ‘labour rights’, were built for them, but not for those beneath them in the class structure. Unlikely to be ‘revolutionary’ or transformative, given how its representatives, most notably labour unions, have entrenched their interests inside capitalism.

Precariat:  a class-in-the-making whose labour is insecure and unstable, so that it is associated with casualisation, informalisation, agency labour, part-time labour, phoney self-employment and “crowd” or “cloud” labour (done on-line via apps).  Deprived of rights, the precariat relies on discretionary and conditional hand-outs from the state and by privatised agencies and charities operating on its behalf. With no sense of loyalty or commitment on either side, the precariat includes 3 varieties:
i) rooted in working-class nostalgia for a lost past, uneducated and blaming the other two groups for their misfortune – susceptible to far right propaganda
ii) migrants and minorities, no sense of being at home, generally disengaged unless provoked to violent reaction (eg riots)
iii) the educated, who experience in their irregular labour and in the lack of opportunity to construct a narrative for their lives a sense of relative deprivation and status frustration, because they have no sense of future. One might call them bohemians, but as they are the potentially transformative part of the precariat, the new vanguard, they are open to becoming the progressives.  Its immediate task is to go beyond the primitive rebel phase in which it found itself in 2011, of knowing what it is against but not yet enough of a class-for-itself to be a power for change.   To become a class for itself the precariat needs to be neither revolutionary nor reformist, but transformative, with a vision of a future which should include socio-economic security, control of time, quality space, knowledge (or education), financial knowledge and financial capital, distributed through national or sovereign wealth funds.