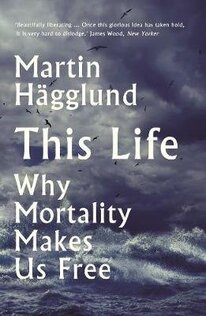 ​You can find lots of links and references to summaries, commentaries, reviews and debates on Martin Hägglund 's own web site   In the notes which follow, I include selected quotes from some of these, rather than attempting to summarise key points in my own words.
In relation to our current discussion around alternatives to growth, I take from this book the idea that we can define wealth as existential wealth in the form of socially available free time.  This is contrasted with Marx's conception of socially necessary labour time, in which work is experienced as a means to an end (ensuring our survival or earning a wage to pay for what we need).  Whether a particular activity counts as socially necessary labour or socially available free time depends on the conditions under which we engage in the activity.   Growth would then be seen as an increase in socially available free time, by virtue of reducing (through technology or sharing out more fairly) the time we have to spend on socially necessary labour.  These distinctions are not about the activities themselves, but about the conditions under which we are obliged, or choose to work.

If this life is all there is, what should we do with it? 'What I do and what I love can matter to me only because I understand myself as mortal.' Through revelatory engagements with some of history's greatest philosophers, including Aristotle, St Augustine, Nietzsche, Hegel and Marx, Hägglund attacks our two great deceivers, religion and capitalism. Only by stripping away their subtle illusions can we discover the true value of our earthly freedom.  https://profilebooks.com/this-life.html

Marx thinks about time and freedom on a very fundamental level. He started from the fact that all living beings generate a surplus of time. Living beings don’t spend all their time surviving, they have some free time to do something else. But what interests Marx from early on is that unlike other animal species that we know of, we can treat that extra time as free time and ask ourselves what we ought to do with it. What is worth doing?

This is the basic motivation behind Marx’s critique of capitalism and his call for a different form of social life. To lead a free life, it’s not enough that we have formal rights to freedom. We must also have access to the material resources and the forms of education that allow us to own and engage the question of what we ought to do with our time together. What really is our own is not property or goods, it’s the time of our lives. To be free also does not mean to be free from all limitations or constraints. To be free is to be able to devote ourselves to something we identify with and care about. So that might mean working really hard but working in a way where we can see the point and the purpose and the meaning of what we’re doing…   https://www.jacobinmag.com/2019/05/this-life-martin-hagglund-review-interview

…under capitalism. How we measure social wealth is not in terms of how fast we can actually produce things or how much time we can actually have. We measure it in terms of private corporations making profits that we then tax and redistribute as wealth. The more time that is devoted to not producing commodities that are profitable for an individual corporation, all of that time is literally worthless under capitalism.
https://www.nbcnews.com/think/opinion/seeking-meaning-life-martin-h-gglund-podcast-transcript-ncna1076516

For the surplus value of our labor to be converted into profit… we must not only produce but also consume commodities, not only sell our labor-power but also buy the products of labor. The resulting profit for capitalist employers is the source of capital growth…. Only the employment of living beings who earn a wage and buy commodities can give rise to a surplus of value — an overall “growth” of capital wealth — in the economy. This is why wage labor is the source of value in a capitalist economy and why socially necessary labor time is the measure of value for commodities. The surplus of time that we produce makes it possible for us to be exploited in the social form of wage labor, which converts our surplus of lifetime into surplus value for the sake of profit and the growth of capital.

Relative surplus value concerns the difference between the wage I pay my workers for one hour of labor and the value my workers produce during one hour of labor. As a capitalist employer, I am always trying to increase the production of relative surplus value, since it is the source of profit, and the development of technology plays a key role in the process. With a more efficient technology I can make my workers produce more value in less time and keep their wages down at the same time.  This reduction of socially necessary labor time is not designed to give us more free time to lead our lives, but to intensify the exploitation of living labor and/or export the production to locations where labor is cheaper to buy.  Such exploitation of living labor is not optional under capitalism. As long as the measure of value is socially necessary labor time, machines cannot produce any value by virtue of their own operations. No matter how efficient a machine becomes, we cannot extract any surplus value from its operation except by exploiting the lifetime of someone who is operating the machine.
https://lareviewofbooks.org/article/democratic-socialism-part-2-immanent-critique-capitalism/
​

​Redistribution can mitigate suffering, but will not change capitalist relations of production

​Hägglund’s immanent critique of liberalism is aimed at such figures as Keynes, Rawls and Piketty, who fail to recognise that the capitalist measure of value – socially necessary labour time – renders structurally impossible a redistribution of social wealth that would enable the actual freedom of social subjects who require material resources (not only political rights) to determine, take up and enact existential possibilities. … While the distribution of wealth may be at issue in modern democratic politics, the very production of that wealth relies upon a form of value and a system of wage labour that structurally necessitate unequal social relations that are in contradiction with the equal distribution of practical freedom… Under capitalism …we are structurally committed to inequality, whether we like it or not, through the extraction of surplus value from surplus labour time. https://www.radicalphilosophy.com/article/the-revival-of-hegelian-marxism

​…collective ownership of the means of production is the material condition of possibility for the principle of production and consumption that Marx specifies: from each according to her ability, to each according to her need. .. under democratic socialism we willlearn to work in terms of "Which
occupations make sense for me to pursue, in light of my abilities and the needs of the society of which I am a part?”
Thus, everything depends on the form of social life into which we are habituated, since it is through social habituation that we learn how to engage the question of what is worth doing with our time. There is not first an individual and then society, or the other way around. Rather, it is in our nature to be socially formed. Because our natural constitution does not establish who we should be and what we should do, who we are and what we can do is a matter of our social formation.
https://lareviewofbooks.org/article/democratic-socialism-part-1-reclaiming-freedom/

… To grasp the status of the principles of democratic socialism, we must distinguish the general from the abstract and the concrete from the particular. The principles do not appeal to an abstract utopia that will resolve political questions once and for all. Rather, they specify the general principles in light of which any democracy must form and maintain itself in order to be democratic… the principles do not impose a particular blueprint for how to organise our economy.  Rather, they specify the concrete transformations of the economy that must be enabled rather than disabled by any democratic institution.  Thus, under democratic socialism different communities can actualize the principles in different ways. The content of socially available free time is not given but must be developed in concrete historical practices; the collective ownership of the means of production can be organized in an indefinite number of ways; and our abilities as well as our needs can evolve along different trajectories.

Nothing makes our predicament clearer than the climate crisis in which we find ourselves. By now it is a commonplace to say that “we” are responsible for destroying the ecosystem to which we belong. The moralizing and psychologizing approaches seek to explain the ecocide with reference to our supposed “human nature,” which is ascribed an inherent selfishness and greed. Yet the fundamental problem is neither selfishness nor greed but the form of social-historical life on which we all depend. … as long as we produce for profit and work for a wage, we are in practice subordinating ourselves to a measure of value that treats all forms of life as means for the “growth” of capital wealth. No individual can break the hold of this measure of value on her own. Only organized collective action that overcomes private ownership of the means of production can achieve an emancipated form of life, where we will learn to be free in mutual recognition of our dependence on one another and the fragile ecosystem of our shared planet.
https://lareviewofbooks.org/article/what-is-democratic-socialism-part-3-life-after-capitalism/