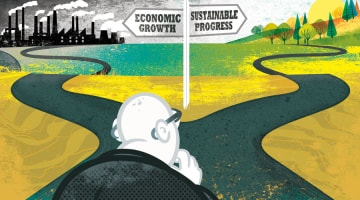 Insightful, radical, constructive, necessary, a first step towards a sustainable and just world.  This is a book that arose out of the author’s frustration with the irrelevance of current economic theorising, which Raworth sees as mechanical, modelled on physics, without insights into the complex dynamics of human behaviour.  The standard model fails to deal with the complexity of the real world. At a conceptual level, we need to move away from the ever-rising trajectory of GDP growth, unrelated to environmental or social consequences.  GDP takes no account of unequal distribution,
voluntary domestic labour or the informal economy.

Raworth draws on the work of a long line of thinkers whose focus has been on human welfare, not wealth accumulation, such as Ruskin, Ghandi, and EF Schumacher.   More recently, Amartya Sen won the Nobel Prize for Economics with a focus on “the richness of human life, rather than the richness of the economy”.  Instead of enlarging GDP, he argues the aim should be to enlarge people’s capabilities – such as to be healthy, empowered, and creative – so they can choose to be and do things in life they value”.
A safe and just society depends on equitable distribution of resources rather than continual growth, since, as Raworth points out, it would take 4 planets for everyone in the world to live as they do now in Sweden, Canada and the USA, or 5 planets to live as an Australian or Kuwaiti. ​She advises,  "Don't wait for economic growth to reduce inequality – because it won’t.  Instead, create an economy that is distributive by design”.  To this end, Kate Raworth advocates a land value tax, a state owned central bank, (perhaps on the lines of a National Investment Bank?) responsible for investing directly in socially useful infrastructue or providing "People's Quantitative Easing" .  She advocates employee-owned companies, member-run co-operatives, and investment in training for jobs in which creativity, empathy, insight and human contact are essential skills which cannot be provided by robots.  She also argues for the the use of taxation to discourage the replacement of human labour with robots.  Raworth echoes Guy Standing's arguments for tackling the over-use of intellectual property rights and suggests a number of ways in which knowledge and ideas can be shared more widely through open source technologies and State-supported reinvestment in the commons.  ​ 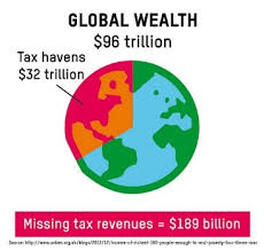 ​When Raworth writes about the safe and just society, she is referring to society globally, and suggests that instead of often poorly designed and implemented aid schemes governments could fund the poor by way of direct remittances - global cash transfer schemes.  If matched with a global corporate tax system that treated corporations as single firms, and closed tax havens, this might become practical.

Similarly, Raworth argues for global recycling of waste products (biological and technical) and a global approach to renewable sources of clean energy (solar, wind, wave, biomass and geothermal) and to energy conservation.  Again, this might be achieved through a switch from taxing labour to taxing non-renewable resources; refurbishing buildings instead of redeveloping them and investing in large-scale, renewable energy projects. 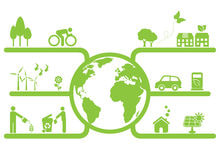 ​Raworth concludes with a call for an end to the social addiction to growth, in which consumers seek transformation through the things we buy.  The alternative, a search for well-being instead of material wealth, would incorporate: